I’m sitting in the same coffee shop where I spent hours upon hours staring at my computer screen, often stuck on a sentence or a concept. It’s a cold snowy winter morning, the chill hitting my face each time the door opens and closes. I’m right back where I was in late 2018, staring at my computer screen, mind hijacked.  I check social media, I check email, I do anything possible to not pick up my pencil.

I haven’t done much writing since hitting the ‘submit’ button on the manuscript to my book The Clinical Guide to Fertility, Motherhood and Eating Disorders: From Shame to Self-Acceptance.

To be honest, I’ve avoided it at all costs.

Each time I think of blogging or journaling my brain shuts down or wants to distract me to do something else (I cannot tell you how many levels of Tetris I’ve mastered in the past few months!). A friend said to me the other day: “well, that’s a trauma response for ya.”

While writing a book fits into a minor form of trauma, my brain may register the idea of picking up my pen and paper the same way as it would returning to the scene of a traumatic experience such as an assault or a car accident. The neurons in my brain are firing in an idential way: danger, alert, potential harm!

My experience writing and then publishing my book in 2019 delved deep into vulnerable and insecure territory at times. My perfectionist reared her forceful head quite a bit and I felt like completing the manuscript incurred comparable pain and patience as being in labor and giving birth to my daughter did 🙂

However, I’m back here over a year later revisiting my old friend: the written word.

I can’t help but think about how this feels similar to re-engaging in eating disorder recovery after some time away from it or after a lapse.

A plethora of shame, guilt, embarrassment and negative self talk can surface during the recovery process. The eating disorder voice may notice that you are struggling and try to pull you back into its deep, dark grip.

I recently had a client tearfully share “I’m so afraid of acknowledging that I’ve made progress because I fear the ED raging up and trying to get me back to the miserable place I was.”

I assured her that there is no way she could go all the way back in the trenches, as she has developed a well of self-awareness and strength that can never dry up.

Perhaps you can relate?  Maybe you have felt yourself slip in your recovery and are too ashamed to call your therapist or admit this to your partner.  Significant life transitions such as moving to a new house or state, getting married, having a child, relationship changes such as divorce, or a losing a pet or family member are times when one is more vulnerable to the age-old coping mechanism of disordered eating to resurface.

Just as I have sat down to write this because I know deep down that writing is a part of my being that I do not want to abandon, I am certain that you can take one step to coming back to your recovery.

What entails one step? (and yes, that’s all you need to do!): 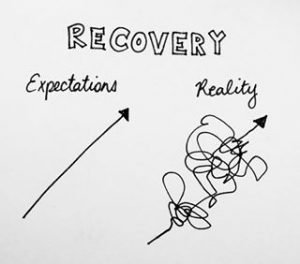 I’m not going to promise that I’m fully ready to write regularly again. Writing this was a mixture of pleasure and resistance. However, I can assure you that as I remind myself that my mind always (always!) tells me that vulnerable experiences will be harder than they truly are, I will gradually invite myself to come back to my writing.  With ZERO expectations, contracts, timelines, or deadlines 🙂

Your recovery is your own.  Try giving yourself the same grace to go about it at your pace and style as we all know that it won’t be sustainable unless it’s born of your well of resiliency.

The connection between eating disorder prevelence and religion.  The effect of spirituality on eating disorder recovery.  This topic is one that deserves a rich and comprehensive look not just by mental health clinicians, doctors and religious leaders, but by all of us because it addresses the way we perceive ourselves having faith in something that is based purely on belief.  If we believe in God, is it easier to believe in eating disorder recovery?  There is so much to write about spirituality and eating disorders and I hope to write future blogs about varying facets of this complex ponderance, but today I write about a specific area that is getting more media attention as of late: the rise in eating disorders in the Orthodox Jewish community.  Women in this culture are pressured by expectation from many different places:  the expectation to eat and eat at celebrations such as Jewish holidays and the weekly Sabbath meal because in this culture, a significant way of showing love and appreciation is to eat; expectation to prepare this meal and be prepared to feed large amounts of people;  the expectation to fast for Passover; the limits of eating Kosher food which in and of itself poses restrictions and control concerns; the expectation to be high achievers in school, work, and marriage; the expectation to be respectful to your religion; and, most seriously for young women, the expecation to be skinny so that you are considered “good marrying matieral” in an arranged marriage.  Phew!

In December 2010 an article in the Washington Post stated that in 1996 (which was 15 years ago!) 1 in 9 ultra-Orthodox Jewish girls in Brooklyn had some form of eating disorder: anorexia, bulimia, binge eating, or other types of disordered eating.  At the time that statistic was published, that rate was about 50% higher than the national average.  One can only think about what the rate might be in relation to today’s ED statistics (today, data shows that 1 in 10 women struggles with an ED).  Why is this?  Clinicians and members of the Orthodox faith explain that from an early age, girls are taught to adhere to strict Kosher rules which means cutting out certain types of food, to not give in to temptation, and to control their food.  Over time, this teaches women to resist temptation and, for the sake of religion, say no to foods that they might really like and in some cases such as Yom Kippur, to abstain from food altogether.  Young women who have been interviewed about their experiences have admitted that when fasting during the time they struggled with an eating disorder, their abstinence was related to body image and not religious faith.  Julia Duin of the Washington Times points out that in Judaism, many of the meanings of religious holidays are directly related to food and the consumption of food, whereas those who celebrate Christain holidays certainly overindulge as well (or fast in some cases), but that this is due to the celebration and not to the meaning of the holiday itself.

Faryn Hart, 24, is an Orthodox Jew from South Africa who struggled with an eating disorder all throughout high school and college.  She recalls sitting down to her family table when she was a teenager, being asked by her mother and grandmother about her grades and her goals for her career, and being able to focus solely on the food.  Dissociation is one of the main coping mechanisms for those struggling with eating disorders, and typically happens when feelings that are painful or uncomfortable are present and food is seemingly the “only” way to deal with the empty and pressured feelings.  The Philadephia-based Renfrew Center, an eating disorder treatment center that has branches in nine locations across the country, did not have means to cater to dietary requirements in Faryn’s religious culture when she tried to go there for help two years ago.  The Kosher requirements for her diet were difficult to manage for the kitchen staff at that time, and when she did eat food that was different than that of the other patients, there was competition, jealousy, complaints of “unfair portion sizes”, and challenges to recovery.  The Renfrew Center now has a special program that caters to the increasing and specialized needs of this community and reports that 13% of its current patients are Jewish Orthodox — up from 5% just three years ago.

Is there a rise in eating disorder rates among this community, or are members just now starting to admit that they have struggled with these issues for years?  I bet that there are eating disorder occurences in every religious culture.  Why this focus on Jewish Orthodoxy now?  I get the sense that this community is very strict and secretive and that there is much need for help but that there is some shame associated with asking for help.  Dr. Catherine Steiner-Adair found this when she visited Israel (which, though research is still being performed and data is difficult to collect, is thought to have one of the highest rates of EDs in the world) and was repeatedly asked to help women who were hiding eating disorders.

Jewish Orthodox culture is very traditional, with one of its centerpoints being arranged marraiges amongst young men and women.  Arranging a “successful” marriage involves high scholarly credentials, a strong family line, and, for the women, a thin figure.  An article I found unveils that exact sizes, weights, and medical records for each woman (and her mother!) are demanded by some families before a marriage is arranged.  And, because mental illness is a greater stigma than anything, young women are stuck: they must love and eat food, but also fast, and also be thin and mentally “healthy”.  Oh and they must be high achievers.

The culture in the United States is obsessed with body image and equates thinness to healthy, wealth, and happiness.  I can only imagine the difficulty that young Orthodox Jewish women must feel living in the US amongst all of this pressure from every direction.  The history, culture, and tradition of religous culture must be revered and respected.  But how do you tell when it is hurting more than helping?  More awareness, more education, and more acceptance of each person in his or her natural form is imperative.

Join now and receive a FREE copy of Kate's e-book, "Why Do I Feel so Out of Control With Food?" Your email address will never be shared without your permission. All fields are required.

Become a Fan of Kate Daigle Counseling on Facebook